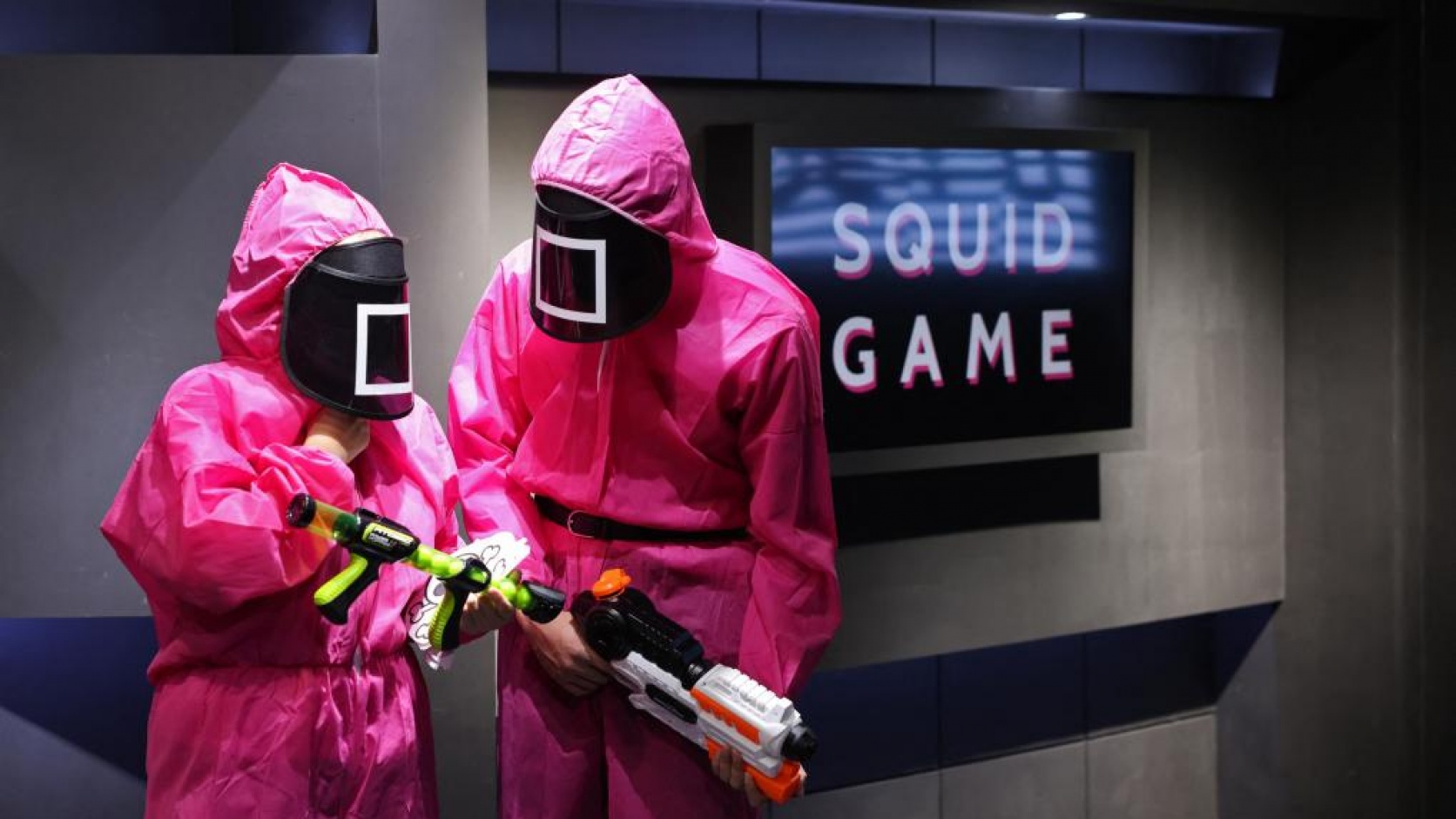 Should we be surprised?  The following is a note in a student’s notebook from a French schoolteacher, as shared by a parent on Twitter:

More and more students from CP to CM2 (i.e. primary school to elementary, 6-10 years old) are watching the series ‘Squid Game’; I would like to note that it is forbidden for those under 16 years of age. More and more, dangerous games are being played in the schoolyard, children reproduce the series, they distribute numbers, play games and those who lose are beaten. I ask you to be vigilant and speak with them…

Meanwhile, a Le Monde columnist reports that his young child insists that “practically every” CM2 10-year-old has seen the show, prompting soul-searching about the safety of Netflix-as-nanny. After all, the streaming channel is comparatively “cheap, always available and is fluent in multiple languages.” Yet, adds the writer, “the side effects linked to reliance on this video nurse are numerous, and sometimes surprising.”

Jean-Michel Blanquer, French minister of Education, joined the chorus of concern, urging vigilance over a phenomenon said to be spreading through schoolyards among children theoretically too young to have seen it.

Yet the speed of the show’s success should not shock us. The priority for the American giant is to maximize attention to its products, which it shares with other entertainment and digital colossi. With Squid Game, Netflix has proven something unique: an ability to unleash an international hit show across multiple markets, leaping over language barriers and finding the pulse of an audience that it has in some ways helped to ‘train’.  Netflix has mastered a particularly fast and compulsive delivery system, and made millions of people used to it. Hours and hours of clever, colorful content come to us without an ad break.

Algorithms then connect viewers to more material, based on their engagement. This feedback loop then funds the making of similar shows, based on what works. In the case of Squid Game, what works seems to be, along with a narrative about adult financial woes, an unsettling type of brutality, mixing childhood themes with faceless killing.

No wonder it has found its way into the schoolyard. It was designed to reach as many living rooms as possible, with considerable money and effort invested to achieve this.

How was Netflix able to do it? The immediate market background is significant.

Netflix was actually in serious need of such a hit.

By the end of 2020, the company was having an interesting pandemic. As lockdowns took hold around the world during the course of that year, millions of new subscribers had rushed in – of 15.8 million new Netflixers, 9.3 million were in Asia, a rise of 65% over the previous year.

The growth of subscriber numbers also adds to Netflix’s advantages in a way quite different to cinema or normal cable television.

This is because, for Netflix, new subscribers are not just key to keeping income flowing on the advertising-free service. They provide the customer data that the company uses when making creative decisions. When creating ‘House of Cards’, for example, its first in-house series, data analysis showed which directors and stars its key demographic (young professionals in their 20s and 30s) wanted, and what themes.

It is a model that seeks to bring Artificial Intelligence into the heart of filmmaking.

It is also joined to an attempt to adapt to different tastes around the world.

As Netflix reaches into local markets, it has been quick to hire talents to make shows for regional audiences – Netflix’s French, Indian, Japanese and South Korean production teams have all made serious plays for long, high-budget TV series which then have a chance to quickly go viral with a global audience, if they can catch the zeitgeist.

Then, going into 2021, following the 2020 boom and the resulting rising share price, a sudden shortfall in new customers made the Netflix share price drop fast – by 11%, shearing $25bn off the company’s market cap. The problem was interesting – the same lockdowns that had brought in new viewers had totally disrupted film production.

There was not enough content to keep the firehose-power delivery machine going. Things were looking less than excellent for the golden boy of streaming.

On September 16th, the day before the Squid Game release, company shares were priced at USD 586.50. A month later, Netflix valued the show at USD 900 million; shares of the company had risen to around USD 629.71. Squid Game became Netflix’s biggest ever hit, bringing in 111 million viewers.

With this much exposure, the show inevitably would invite imitators: first, in the form of Netflix attempting to reproduce the hit, next, its competitors trying to follow suit, and finally, as we can see, youngsters trying to reproduce the scenes in their own schoolyards. Imitation is sometimes human nature, especially among the very young.

There is no doubt that Squid Game, whose Korean director/writer Hwang Dong-hyuk sought to make an “allegory about modern capitalist society” is a clever creation: it is also relentless in the cruelty unleashed on helpless characters, sometimes by the same characters. Motivated by a giant cash prize, the contestants in the concentration-camp like Squid Game set seem to forge allegiances, yet betray each other repeatedly.

There is also no doubt that it is a dark view of human nature.

It is far from a worldview that we should want to offer our younger children.

Squid Game’s pitiless scenario has captured a mood, very likely pandemic-produced, shared by many adults – and inevitably felt by children as well. It is formed of a mix of isolation, precarious access to security and resources, together with a feeling of helplessness.

The pandemic reminded us of what it means to be shadowed by a greater power: be it the virus itself, the government-ordered lockdowns or the destruction wrought by collapsing industries. Frustration is understandable, considering all this. Pessimism forgivable.

Allowing for the freedom of creative work, we should be wary of committing to these emotions as inevitable.

The pandemic risks normalizing some darker parts of human nature.

We may need to consciously work on trying to strengthen the happier parts of our nature – by finding and sharing happier stories with each other, and with our children. By choosing material that carries some optimism and ethical integrity, we may begin to teach the algorithms that track our tastes that not all we want to consume, especially where our families are drawn in as consumers, should consist of gore and negativity.